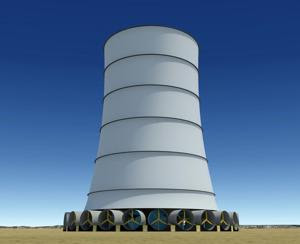 First Solar Wind Tower in the World to be built in Arizona.


The small Arizona border town of San Luis will be the site of the first Solar Wind Energy Tower installation in the world.


The $1.5 billion project would generate electricity through the use of ambient desert heat that passes through a concrete structure its proponents say would be the tallest in North America.
Solar Wind Energy Tower is buying 640 acres, the tower and its associated facilities will only cover a fraction of that space.
“Besides the tower, there would be a guard house, personnel and administration building, a water retention pond, a maintenance facility and relay stations for the power,” Pickett said. “We expect to be generating on an annualized basis more power than the Hoover Dam currently generates — more than 4 million megawatt hours.”
A series of pumps deliver water to the tower’s injection system at the top where a fine mist is cast across the entire opening. The water introduced by the injection system, Pickett said, then evaporates and is absorbed by hot dry air which has been heated by the sun’s solar rays.
The result is the air becomes cooler, denser and heavier than the outside warmer air, and falls through the cylinder at speeds up to and in excess of 50 miles per hour. This air then is diverted into wind tunnels surrounding the base of the tower where turbines inside the tunnel power generators to produce electricity. Hoover Dam currently generates — more than 4 million megawatt hours.”
“We considered areas of the world where the tower would be most efficient,” he said. “We require very hot and arid areas, such as parts of the Mideast, northern Africa and the U.S. Southwestern desert, which is one of the driest areas in North America.”
Pickett said his company was able to access a decade of weather data gathered by the U.S. Department of Defense for strategic reasons — a database that had hourly data at different elevations — and take that information to build a picture of what happened month to month over a ten year period.
“We then knew how to predict almost exactly what the tower would do in that area, so San Luis became the prime place in North America for the tower,” he said.
:source Inside Tucson Business

Posted by Stratton Group of Keller Williams Southern Arizona at 9:34 AM No comments:

Tesla to Tucson? City of Tucson has your building permit ready!

Tucson Commercial Real Estate update for this week is all about Tesla Motors! Tesla is looking for commercial development opportunities for a 5 million square foot facility.


The permit is for a one-story building of up to 5 million square feet in size at an address “to be determined.” It was issued by the city of Tucson development services department.

Tucson is in the running with several different cities for the location.   The company has said the factory would employ about 6,500 people. Cities in California, Nevada, New Mexico and Texas also are finalists.

Currently it looks as if Reno is a top runner as well.

The release of the Building permit was a clear sign that Tucson wants the business and understands that this would be one of the major economic developments for the city in over 30 years.

Tesla based out of Palo Alto California is looking to build the Gigafactory and have site selection completed this year and have battery production in place by 2017.

The overture of the City of Tucson issuing the permit was a clear signal to Tesla that our local government is in support and will not tie the company with red tape!

Congrats to the City of Tucson, our economic development and job growth is imperative for our City and economy to grow and maintain a healthy heartbeat. 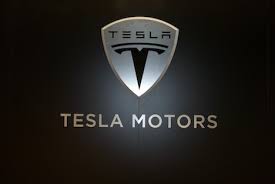 Posted by Stratton Group of Keller Williams Southern Arizona at 6:25 AM No comments:

Posted by Stratton Group of Keller Williams Southern Arizona at 6:21 AM No comments: